Appropriate for those days past when the average Norwegians still had a relationship with God, the cathedral was at the head of a line that ran to the parliament building and on to the royal palace.   In fact, it marked the top of a cross formed by adding a second line from the city center and the regal Grand Hotel to city hall.

Extend the line beyond the city hall plaza to the harbor and you arrive at a fortress established in the Middle Ages primarily to keep the Swedes at bay—or, to be more precise, at fjord, as the fortification guarded the city from an attack from the Oslo Fjord.

The Opera house, humble though it was by Continental standards, was one of Oslo’s cultural gems.  The building had that air of tradition that hearkens back to a gilded age when society folk attended the opera and the riffraff did not.

Once you scaled the broad staircase of the entrance hall, you would find yourself in the salon.  There, a small bar dispensed delicate glasses of sherry, cups of strong coffee, and soda for the children.  Couples and families in their Sunday best, or preferably better, would linger over drinks at café tables spaced at a respectful distance from each other.  The hushed atmosphere was genteel, formal, intellectual, artistic, and just a little somber.

But then, the likes of Wagner’s The Flying Dutchman—my none-too-cheerful childhood introduction to the stage-craft of opera—is not to be taken lightly.  Indeed, opera is serious business. Attending the opera is not something you do on a whim, or instead of going out for Chinese food or to the movies.  It takes forethought, with early booking of seats, mental preparation, and well-coiffed hair.  Unless you are an artiste yourself, in which case a hairdo reminiscent of Beethoven on a bad day is a prerequisite.

The aficionado will always have read the translation of the foreign libretto, or lyrics, in advance, and knows the storyline and structure of the work.  The true admirer of the art has two or three top recordings, and has already formed an opinion on which conductor, orchestra, and soloists come closest to realizing the composer’s vision.  And how would they know what he intended?  That is not clear, but it’s irrelevant:  A certain level of knowledge of, and dedication to, a work is presumed to confer an automatic right to offer critique.

In a nineteenth century sort of way—back when digital still meant pertaining to digits, Latin for fingers, and long before anyone thought it a good idea to type using only ones thumbs—these people see themselves as having friended Wagner.  As if they were Friends on Facebook, they feel free to Like, comment, or otherwise speak their mind about the composer’s hidden themes or use of a leitmotif.  Although the words are different, the passionate debate resembles any discussion of baseball stats.

Opera buffs are a lot like international soccer fans and American NASCAR fans, only quieter, nerdier, and better dressed. Whatever the temperament and proclivities of these groups, they are all still fans.  The word fan is, of course, short for fanatic.  Anyone willing to endure four-hour stints of Der Ring des Nibelungen, Wagner’s early version of a dramatic mini-series, seems a likely candidate for the diagnosis of obsessive-compulsive disorder.  In their defense, while they are behind the times by more than a century (in itself a likely sign of some kind of avoidance syndrome), they are nowhere near as OCD as the average video gamer of today.

A scene from a Wagner opera

Angst and Worship at the Opera

Artistic rendering of The Flying Dutchman 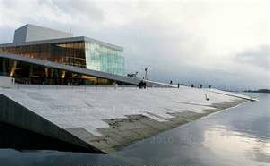 In the twentieth century, the Norwegian Opera was housed in elegant quarters in the heart of the city of Oslo.  It was just down the street from the “new” main cathedral of the Church of Norway, used for royal and state events since the late 1600’s (the “old” church was built soon after the year 1000).  It was also within easy reach of other centers of the ruling elite, those folks likely to frequent the opera—the capital’s aristocracy. 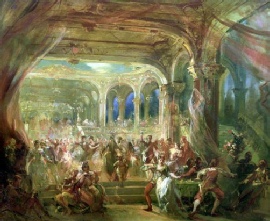 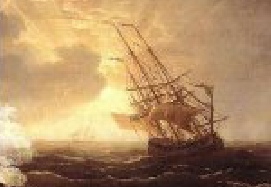